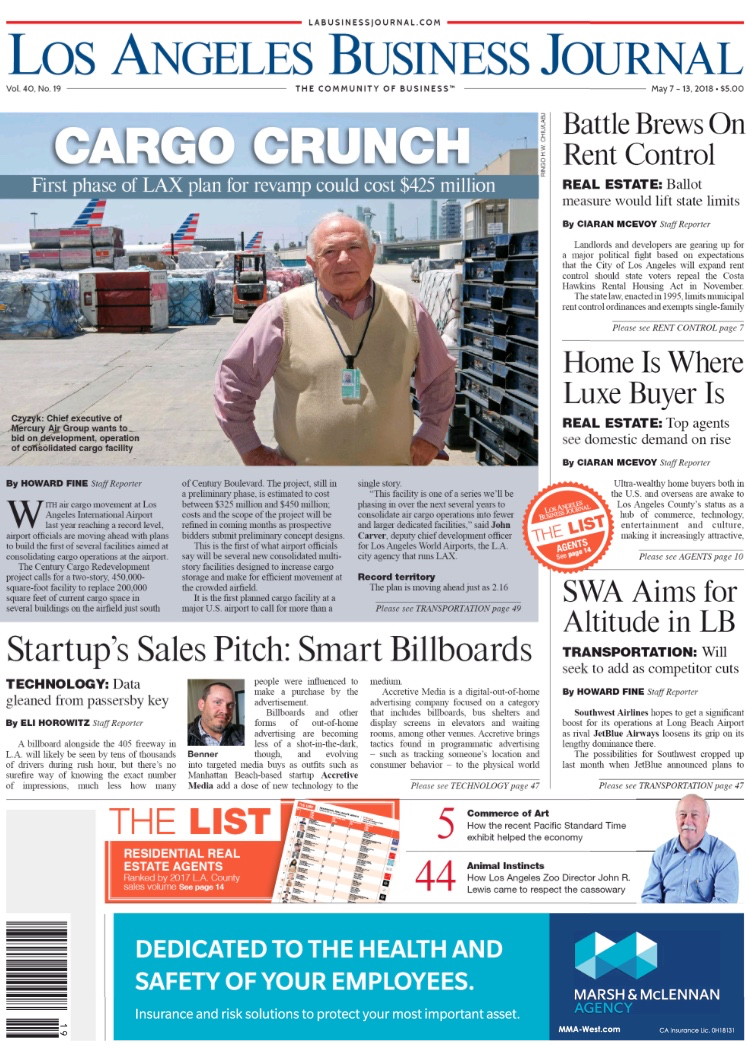 A billboard alongside the 405 freeway in L.A. will likely be seen by tens of thousands of drivers during rush hour, but there’s no surefire way of knowing the exact number of impressions, much less how many people were influenced to make a purchase by the advertisement. Billboards and other forms of out-of-home advertising are becoming less of a shot-in-the-dark, though, and evolving into targeted media buys as outfits such as Manhattan Beach-based startup Accretive Media add a dose of new technology to the medium.

Accretive Media is a digital-out-of-home advertising company focused on a category that includes billboards, bus shelters and display screens in elevators and waiting rooms, among other venues. Accretive brings tactics found in programmatic advertising – such as tracking someone’s location and consumer behavior – to the physical world of the out-of-home venues. Accretive can get information on just about anyone who passes by one of its billboards on foot or in a car as long as the passerby has at least one phone app with location services enabled and running. It does so by purchasing time-stamped geolocation data from companies that aggregate information gathered from mobile apps – often with the permission of cell phone users, who likely signed off, wittingly or not, when signing up for an app.

The location data comes with unique user IDs – each cell phone has one – that can be compared to consumer reports on the individuals compiled by several consumer data firms. Then all of the data is sliced, diced and analyzed before being packaged as a sales pitch to advertising clients.

The key point: Accretive can offer sufficient specifics on the audience for its billboards to allow clients to craft micro-targeted ads. A heavy rush-hour flow of males between the ages of 18 and 25 might convince a fast-food chain to buy placement on a digital billboard from 5 p.m. to 7 p.m., for example. The digital billboards can be switched out on a scheduled basis, making specific time slots available to advertisers.

Benner said Accretive has planned, executed, or measured over a half-dozen campaigns for clients ranging from local advertisers to large national brands since its launch in February. He declined to discuss revenue or disclose any clients.

The launch of Benner’s company comes at a time when questions about digital privacy are at the forefront of the national conversation. Revelations about now-defunct political advertising and consulting firm Cambridge Analytica’s use of personally identifiable information from Facebook Inc. to attempt to influence the 2016 election has more and more people concerned about how data is used to track and target them individually.

Accretive’s use of location data produced by third-party phone apps is troubling to some. Jeremy Gillula, tech policy director at the Electronic Frontier Foundation, a San Francisco-based nonprofit group that advocates for privacy rights, said he’s not sure people are actually giving consent for their data to be used as extensively as it is. “A lot of the times I’m perfectly happy sharing my location data with an app, but I’m not OK sharing my data with an analytics system,” said Gillula. “The fundamental concern when you’re broadcasting this information and someone is scooping it up, they can learn a lot about your location history,” he said.

Benner counters that the use of personally identifiable information to help advertisers target consumers is not a new tactic and actually improves the consumer experience when dealing with ads. “People have been using (personally identifiable information) in advertising forever,” said Benner. “Phone numbers for telemarketers, addresses and emails for direct marketing. – if it’s used to serve someone an ad that may be more relevant to them rather than seeing a bunch of punch-the-monkey ads, there’s no real consumer harm there.” Either way, Benner said, his company analyzes behavioral data on cell phone users but does not identify them personally or go beyond reaching them digitally. “In a post-Cambridge Analytica world, we always need to make sure we are ahead of the curve in terms of privacy compliance and regulations,” Benner said. “While all targeted advertising uses data, there is a right way and a wrong way to use it, and we firmly stand behind the fact our data partners/protections/processes have the best interests of both consumers and brands at heart.”

Any liability questions will likely revolve around the idea of consent, according to Mahroze Baloch, an attorney with Adli Law Group who’s worked on data privacy cases. “Consent is the main thing we want to look at if there’s a privacy issue here,” Baloch said. “You’d be surprised to find that we have consented to a lot of these things. Baloch said Accretive’s model appears to be legal, based on what’s publicly available about the company. “There are no red flags in that sense,” he said.

Digital-out-of-home advertising represents about 3 percent to 5 percent of a typical advertiser’s budget, according to Daniel Martin, a partner at PSM Comm Arts. That could rise significantly as Accretive and others increasingly function as a clearing house, keeping track of billboards and other out-of-home venues, and serving as a media buyer for clients. “I don’t want to call up malls and then the airport and then a hospital to find out what their digital opportunities are,” Martin said. “I want to go to a group like [Accretive] to find all the opportunities.”

Digital-out-of-home advertising is already up 13 percent year-over-year globally to about $12 billion, and 10 percent year-over-year in the U.S., according to Barry Frey, president and chief executive of the Digital Place-Based Advertising Association. “Media inside the home is fragmenting and declining,” Fray said. “Seventy percent of our time is now spent outside the home and 82 percent of the population is in urban areas.” Benner said only tech giants such as Facebook, Google, Apple, Uber, Amazon, Viant, and a few others have the type of consumer data Accretive is able to provide its clients. Benner also said he is able to tell his clients about consumer history as well as how many passersby actually purchased the product.

“Billboards and other out-of-home ads don’t buy products, consumers do,” he said. “We shouldn’t target the placement, we should target the consumer.”